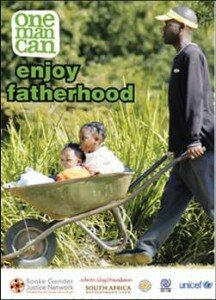 South Africa has the highest rates of gender-based violence of any country in the world and by far the largest number of people living with HIV and AIDS of any country. Sonke Gender Justice is an organization that works with men to promote gender equality, prevent gender-based violence, and reduce the spread of HIV/AIDS. Sonke uses a broad mix of social change strategies, reaching nearly 25,000 men each year through workshops and community dialogues, nearly ten million listeners a week via community radio shows, and millions more as a result of media coverage of high-profile advocacy work to effect change in government policies and practice.

The organization’s flagship program, the One Man Can Campaign, is dedicated to supporting men and boys to take action to end domestic and sexual violence and to promote healthy, equitable relationships. The OMC Fatherhood Project was developed and implemented in 2007-2009 in response to a request from UNICEF to increase men’s involvement in meeting the needs of children affected by HIV and AIDS, including children who had lost one or both parents to AIDS in two rural communities, Nkandla in KwaZulu-Natal and Mhlontlo in the Eastern Cape.

An external evaluation (46-47) found that the OMC programme shifted men’s attitudes about gender roles and power relations in the direction of gender equality, and improved numerous health outcomes, due to reduced alcohol use, safer sex, and reductions in male violence, against both women and men. OMC has been featured as an example of best practice by the World Health Organization, UNAIDS, and the UN Population Fund, and translated into nearly a dozen languages and implemented all across Africa.

Sonke defines itself as a feminist organisation working to achieve gender transformation, and using as one of its principal strategies the engagement, education, and mobilisation of men. Sonke’s board of directors, staff, and volunteers are nearly 50 per cent women, and it works in close and ongoing partnership with many more traditional women-led women’s rights organisations. Sonke’s advocacy campaigns often deliberately profile men and women working together for gender justice. This demonstrates simultaneously that gender issues are also men’s issues and that men and women can and should work together to achieve a gender-equitable world.

Promoting Gender Equity by Engaging Boys and Men
Engaging Men and Boys: A Brief Summary of UNFPA Experience and Lessons Learned illustrates a range of initiatives that have engaged men and boys for the promotion of gender equality as well as sexual and reproductive health and reproductive rights.

Sonke Gender Justice is part of MenEngage, an alliance of 600 organisations working with men and boys in over 30 countries in support of gender equality.